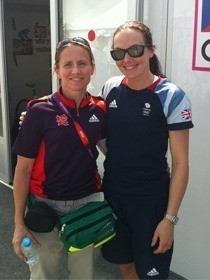 Looking back through the diary, my summer of sport consisted of 83 days! London 2012 was a fantastic experience that is hard to put into words and one that many of us will never forget being involved in; however I am secretly relieved that it is all over and normality can resume!

My Olympic journey started towards the end of 2011 when I was asked to start planning the medical provision required by Team GB for their preparation camp that was to be held at the University of Loughborough in June 2012, immediately prior to the Olympics.

The Prep camp opened on June 18th 2012 and was a residential camp where all the Team GB athletes and support staff passed through for a period of time prior to the Olympics. The camp was designed to provide training facilities for the athletes whilst they started to bond as ‘One Team GB’. It was at this preparation camp that they were given all their Team GB kit and did lots of interviews for the media. During their stay the athletes had access to physiotherapy, sports massage, medical support, strength and conditioning support and a recovery suite (ice baths and cryospas).

It was really great to see all the GB athletes prior to the games – full of excitement and hopeful of what they might achieve after years of hard work. With a number of high profile British athletes all in one place, we were a very popular hangout for the media, as well as being visited by VIP’s such as HRH Princess Anne, the Prime Minister, Sir Steve Redgrave and Dame Kelly Holmes. 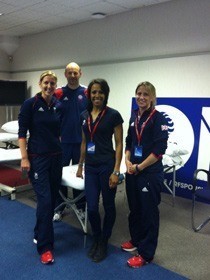 The prep camp was great but long days and living away from my children was difficult. However I won’t pretend that it was all hard work, we did have some down time! The HQ staff (me included) fielded a mean 5 a side football team that took on the University’s Police force and won! On a nice sunny afternoon we managed to get in a bike ride around Leicestershire on Team GB bikes and I even managed an 11mile run along the canal tow paths with two of the Met Police officers who were in charge of security at the camp. Well I had to do some form of exercise to counteract all the Cadbury’s chocolate that we were being given as they were one of the official sponsors of the Games!

Once the Games were in full flow I changed my clothes to become one of the ‘Purple People’ and went into London as a Physio Games maker! My role during the Games was to be part of the Medical team at the Velodrome and BMX track. At the venues we ran a physiotherapy service for the athletes prior to and during their training, to keep them on top form prior to their competitions.

Then during the excitement of the events I had the best view in the house! For cycling I was in the middle of the track – ready to go with the Doctors and paramedics in the event that an athlete might fall off their bike doing 50mph! For the BMX I was one of 6 medical emergency teams stationed around the dangerous course, again ready to extract them from the course in the event of a serious crash. The course was amazing and prior to the event we climbed up to the top of the start ramp to experience for ourselves the sheer drop that propelled the bikes into the first ramp! The athletes that compete in this sport must be wired very differently, the danger that they face during training and racing is significant, but makes the sport so exciting to watch!

Despite having covered a variety of sporting events in the past, I can honestly say that I have never experienced an atmosphere quite like that at the Velopark! I was inside the track when Sir Chris Hoy won his Gold medal in the Keirin, everybody screaming and shouting as his bike crossed the finish line, the crowd so loud that you couldn’t hear the person next to you. I was there when Vikki Pendleton made her last unsuccessful efforts to win a gold medal and came away with a silver.

As a Games maker we were supposed to remain neutral and support all countries equally… but in those final races how could I not cheer for Team GB! And cheer I did! After the celebrations of the closing ceremony and the feeling of Olympic fever being over, the build-up to the Paralympics began! 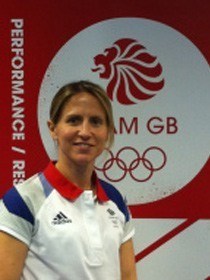 Back in the purple outfit again I restarted my commutes into Stratford; however this time required a little more will-power… with 6:30am shift start times I had to get up at 4:45am every day!

Those early mornings were sure worth it though! Although I was based in the medical polyclinic in the athletes’ village, my role required that I went out to different venues to cover a variety of events. My early morning starts meant that by 8am on some occasions I had seen the sun come up over the Olympic Stadium whilst practising medical scenarios with the Doctors, treating athletes and then watching the events with a trackside seat! The Paralympians were truly inspirational to watch and it was at times a very humbling experience being involved in their medical care.

My summer of sport ended on Monday 10th September when I was invited to attend the athletes’ parade in London as part of Team GB. It was amazing… thousands of people lined the streets to celebrate the success of Team GB with marching bands, Chinese Lions, all topped off with a fly past by the Red Arrows. These athletes really had moved a country to tears over the course of 6 weeks with their stories of survival, successes and sometimes failures. They had inspired me, they inspired my children and I am sure that they had inspired whole generations.

Even now, weeks after the torch has been extinguished, my children still play ‘Olympics’ with one wanting to be Bolt and the other one wanting to be Jess Ennis… it definitely makes for an interesting competition!