Our TASS physiotherapist, George Labor, shares his experience of working with Team GB at the Half-pipe competition of the Freestyle World Championships in Oslo, Norway.

It had been a long time since I was this excited opening a parcel! Within it was my first bit of National team kit. Inside was a bright red jacket with “Great Britain” on the back – amazing! I had been chosen to work with the Great Britain Half-pipe skiing team at the World Championships in Oslo! 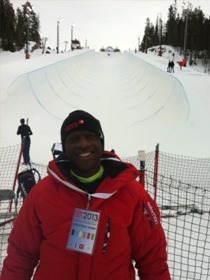 The trip to Oslo started with a very early taxi at 4.00am. The amount of kit I had looked like I was going away for 6 weeks, not 6 days. By the time we arrived in Oslo and had settled in it was lunchtime so we decided to go for something to eat in the hotel restaurant. I had been warned that Oslo was expensive but £20 for a cheese burger and £9 for a coke (ignore my unhealthy choices) was unbelievable! It was a good burger – but not £20 worth.

Later that evening I met the squad, screened everyone and together we discussed a few areas to work on over the next few days.

The next morning we had a short drive to the slopes where I got to see a full Half-pipe for the first time; they are even longer and steeper than they look on the TV. I introduced myself to the Sports Doctor and the Consultant Anaesthetist who were very calm and laid-back. They were used to covering ski jumping and they thought that this event was pretty run of the mill in comparison.

I spent the next two days of training getting accustomed to the Half-pipe. I was allowed to walk up the side and sit by the edge which proved a fantastic vantage point but was even more worrying watching the riders performed tricks above your head. Every time a GB rider came down I stood holding my breath. Thankfully it wasn’t for too long or I may have passed out!

The qualifying and finals take place in the evening so leading up to it there is lots of nervous energy around the hotel meaning the days can feel a bit prolonged. But it does allow plenty of time to prepare the athletes for their competition

Unfortunately none of the GB riders made the finals, however one rider did place high enough to get a spot for Great Britain at the Sochi 2014 Winter Olympics, which was brilliant. This was the big aim of the competition so all the coaches and athletes were very pleased. Thankfully all of the GB riders came through unscathed. 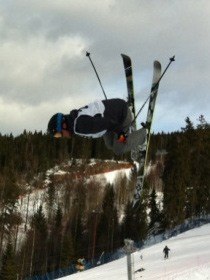 With finals not taking place until evening and none of the squad involved, I was invited to join them on the last day for a session of “leisurely skiing”. Spending a day skiing with the GB Half-pipe team is not the usual “leisurely skiing” I normally do. We headed straight for the ski park. There were people flying through the air in all directions doing jumps and flips and riding the rails!! For some reason your brain tells you that you should be able to do this, forgetting, of course, that these guys are talented athletes who have been doing it for years.

Half way up the mini half pipe, completely out of control on a wall of ice, I did remember that I was a physio and not a professional athlete, and had not trained for this; but it was too late. The next thing I knew I was sliding down the middle of the pipe, face first, with everyone laughing at me. I can now say I have skied a half pipe (well sort of) and done a few small jumps, but for the rest of the day I decided it best that I should stick to going around things.

It was a great experience and my jacket has pride of place in my wardrobe. I look forward to watching at least one athlete that I have worked with during the Sochi 2014 Winter Olympics.