So after months of anticipation and nearly losing the belief that it would ever happen, the e-mail finally arrived. I thought it was yet another e-mail telling me I was still under consideration. But when I opened it, there was something different about this one. It had a lot more writing. In fact it was an e-mail asking if I was still available to work at the London 2012 Olympics and could I cover Athletics: yes and yes!!! I wanted to pick up the phone and scream “I accept!” to someone but the system didn’t work like that and e-mail response was all I could do. 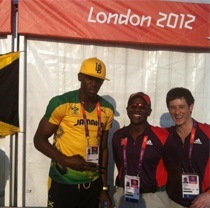 The timing of the email, just a few weeks before the start of the Games, made it difficult to organise my diary at Bodybalance. We were already on an additional schedule at the clinic to cover the extra service we were providing to the countries using the Hertfordshire Sports Village as a Pre-Olympic training camp. I was asked to start my Olympic shift a week before the Games began; first at the training track and then working throughout the entire Athletics programme.

Accreditation and uniform collection was very exciting and really started to bring the whole experience to life, though the location in East London had not been chosen for its aesthetics. A few tube stops away I got my first experience of what would become the “Olympic vibe”. As the location was near the end of the tube line there were not many people on. Whereas usually everyone would be looking down and not chatting to each other, suddenly complete strangers were smiling away and excitedly talking about what they were going to be doing; it was great. The uniform was at best, in my opinion, functional – I will not be wearing it again.

The first shift came around in no time. Fully kitted out like on my first day at a new school, the uniform which had fitted like a glove when collected, was oddly both too long and too tight in various places. It was 7.30am, a week from the start of the Olympics, and I was travelling on the tube in my full uniform. At this stage a lot of the general public hadn’t seen anyone in this before.  I was getting strange looks and feeling very self-conscious. However, as the tube got closer to Stratford, more volunteers got on and, again, there was immediate solidarity amongst us and we were chatting in no time. The shift flew by but in hindsight without much going on. The majority of the bigger nation’s athletes were in still in holding camps around the UK and Europe meaning there were only a handful of athletes training in London.

The shift I had eagerly been waiting for at the Stadium came around. Yep, I was off to the Olympic Park and the Stadium itself! I kept checking my accreditation had not fallen of my neck. It was worth more than one of Willy Wonker’s magic tickets to me! The first thing that blew me away was the size of the Olympic Park; it was huge. The next thing was how smoothly and efficiently it all was controlled from getting through the military security to moving around the park and getting directions off the volunteers.

I was in the Stadium on the morning of “Golden Saturday” and the roar when Jessica Ennis was performing was electric. It was nerve racking being on standby with 70,000 people in the stadium and millions more watching live on TV.

I was very fortunate to have a number of amazing, different experiences over the 3 weeks. I was one of the lucky ballot winners to watch the opening ceremony dress rehearsal and I am proud to say I managed to keep it a secret (even from my wife)! I got to watch a huge number of famous track and field athletes on the warm up track in a more relaxed atmosphere than they normally are in front of the world’s media. I was also asked to work for part of the Closing Ceremony and also managed to watch some of it. These truly were once in a life time opportunities that I shall never forget. I am very proud of the small part I played in the London 2012 Olympic Games.