Kessie Soper shares her experience of travelling with the British Bobsleigh team to their sprint training camp at the Michael Johnson Performance Centre in Texas.

As part of my role working with TASS (Talented Athlete Scholarship Scheme), I accompanied the British Bobsleigh development squad on a training camp to the Michael Johnson Performance Centre in Dallas, Texas.

You might wonder what the British Bobsleigh team was doing in Dallas in September, where the temperature rarely fell below 30 degrees? So did most of the locals. Pretty much everywhere we went, we were met by a perplexed expression and a surprised exclamation of ‘British Bobsled?!’…

The purpose of the trip was for the athletes to work with the expert team at the Michael Johnson Performance Centre on improving their speed and acceleration. The push start is an essential component of performance in Bobsleigh; the speed at which the sled accelerates at the top of the track is a crucial influence on the final finish time. This is why so many bobsleigh athletes come from the world of track sprinting, and why the British Bobsleigh team travelled to such a centre of excellence in Texas for a sprint training camp.

So after a long and boring flight, everyone was excited to arrive at the hotel and get settled in. My first experience of the local cuisine was quite fittingly the biggest burger, fries and diet coke possibly imaginable! Training started the very next day; the first day consisting mainly of meeting the team, orientation and screening. Screening aims to enhance performance and prevent injuries by identifying areas to improve in flexibility and strength. After the first day, all the athletes had plenty to work on and were eager to get going. The following 10 days involved an intensive training programme. Each day we arrived at the centre early in the morning for pre training preparation. The athletes who needed it came for physio, whilst the others warmed up with the hot tub and completed their injury prevention exercises. The morning session consisted of sprinting sessions, working on the start, running technique, video analysis and plyometrics. The athletes were then encouraged to complete a lengthy recovery regime including contrast bathing, physio and foam rolling. After lunch and a power nap, the athletes completed the same routine, but replacing the sprinting sessions for a weights session.

The centre provided state of the art facilities including an underwater treadmill, outdoor pool, indoor running track, indoor turf and large weight room. It is owned and run by the sprinting legend Michael Johnson. On the second week of the camp, Michael Johnson was at the centre and really inspired the athletes by watching their sessions and providing tips and advice. I admit to being a little star struck after his contribution to the London Olympic Games! The rest of the staff at the centre were amazingly enthusiastic and motivational. There was also a variety of American athletes who train there and also provided a great deal of inspiration to the team.

The trip was intensely scheduled with training, so there wasn’t much ‘down time’. However, we did get to go to an American Football match which was an amazing experience and gave us a real taste of American sport. The hotel was also very conveniently located opposite a shopping village and it would have been rude not to sample the local retail facilities! For me, the trip was a fantastic experience to learn about the intricacies of sprinting technique and to visit a world class centre with such amazing facilities and organisation. 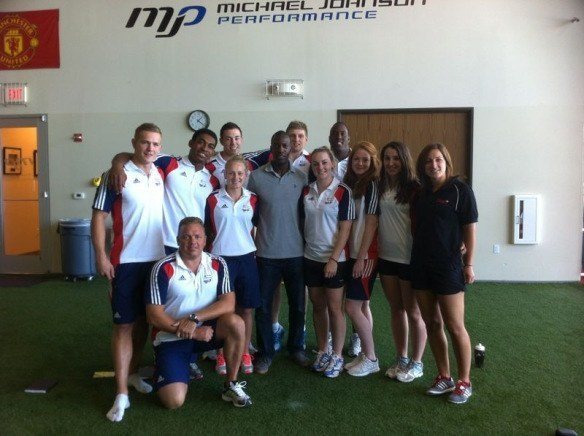